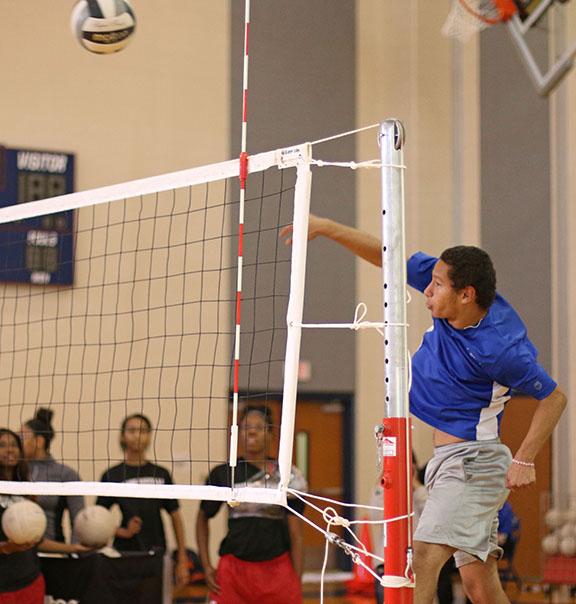 Senior Alexander Fuentes spikes the ball over the net during Powderbuff practice. (Photo by: Kyhia Jackson)

For the first year ever, Student Council will host a “Powder Buff” male volleyball tournament. The games will be played this Thursday in the  Sandra Meadows Arena beginning at 7 pm. The $5 admissions cost will be donated to the campus charity Sharing Love Counts.

The senior class officers were inspired by the success of the annual girls Powder Puff football game for this project. President Damian McElwee believes Powder Buff will be just as big of a hit.

“Since girls are able to reverse the roles and play football, we thought it would be entertaining to see guys do the same thing,” McElwee said.

McElwee is also excited that the senior class officers decided to donate 100% of the proceeds to charitable causes.

“It is really great that we are using this event as a platform to raise money for the charity Sharing Love Counts,” McElwee said. “The money that people pay to get in buys them a good time and also provides Christmas gifts for their underprivileged peers.”

If the game has a successful turnout, the event will become an annual tradition.

“I think it is going to be a real success,” McElwee said. “Volleyball is a popular sport, and everyone loves a little competition.”

“We have been getting better at practice,” Vice said. “We are the most cohesive group of seniors ever to be assembled. I just kind of feel bad for whoever is on the other side of the net.”