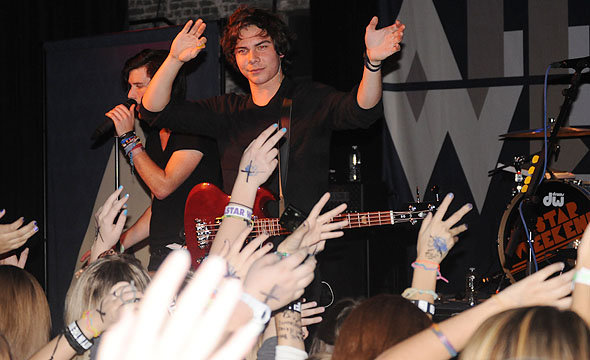 Celebrating the end of their “Suddenly Yours” tour, All-Star Weekend visited Dallas’ music bar, “The Prophet Bar” and were welcomed by a small group of dedicated fans eagerly awaiting their show. After being featured on Walt Disney’s “Next Big Thing” competition, All-Star was signed to Hollywood Records and began touring with bands such as Action Item, Steven Jerzak, and The Scene Aesthetic.

“It’s not just about the song now, it’s about the whole package. We have a lot of meet and greets after the show and we think that’s important because we really get to connect and interact with the fans,” bassist Cameron Quiseng said.

Before the show All-Star Weekend made a point of doing just that, meeting with fans from Radio Disney and posing for pictures along with them. Lead guitarist, Nathan Darmody even showed a few guitar tabs to a young fan.

“We definitely didn’t know what it entailed, being on a label. There was a lot of expectations and I didn’t know we’d hit the studio right when we got signed,” lead singer Zachary Porter said. “We wrote two albums the moment we got signed. We really had to switch gears.”

The band’s debut album, “Suddenly Yours” has gained attention from major enterprises, songs have even been featured on shows such as “Sonny with a Chance” and their album as a whole has made a cut in the Billboard’s top 200. And with major inspirations such as MGMT, Neon Trees and Passion Pit, All-Star keeps growing.

“Ever catch a show and feel that presence of the artist on the stage and the songs overwhelming you, your like wow, you feel like a new person? You just got totally mind blown by the artists. Artists in generally definitely give me inspiration.” Porter said.

And as new artists, All-Star is still getting use to what it’s like performing on stage.

“Our first show was great, we were all really nervous but it went great. However our second show was a complete disaster.” Quiseng said, “I accidently knocked the mic out of Zach’s hand!”

Even with their influences, the band still tries to create a new and original sound.

“It’s great that we get to write our own songs and write what we want to play and no one tells us otherwise. It gives us a lot of creative control.” Porter said.

But one thing that the band will always remember from their experiences on tour, is a prank they played on the band Steven Jerzak.

“I just felt it needed to be done,” Quiseng said, “I bought 4,000 post-it notes because that’s all they had at Wal-Mart and then I tweeted about it, and ended up getting 2,000 post it notes from fans so while he was on stage I just went and turned his van into a piñata.”

However, despite all the fun, All-Star misses their family the most.

“We get so much candy everyday, I just miss going home and having a home cooked meal. Your own bed, alone time…seeing your family. You get a little homesick.” Quiseng said.