Duncanville marches on to the Area Round with matchup against Hebron 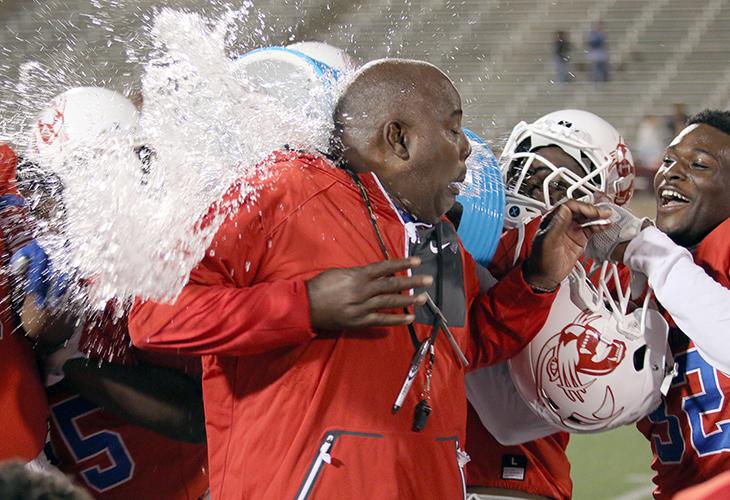 Panther Head Coach Reginald Samples takes a shower at the hands of this team after Duncanville's first round playoff win. (Jose Sanchez photo)

After a hard fought battle between two very solid football teams, Duncanville put away Harker Heights 24-7 on Friday advancing to the area round  matchup against a very solid Hebron team Friday night at Bedford’s Pennington Field.

Hebron has had a very solid season to this point, carrying an overall 8-3 record. They are coming off of a win in the bi-district playoff round with a 40-35 win over Plano East. The win came with a price as their starting junior quarterback Clayton Tune was forced to leave the game early due to injury. Hebron is unsure about him being able to start the game against the Panthers this week. This is similar to when Duncanville lost senior quarterback Jaylin Nelson for the season due to injury a few weeks ago. This could play well for a Duncanville team that has adjusted quite nicely since Nelson’s unfortunate injury.

Duncanville has remained hot, carrying a three game winning streak under their belt. Just like most championship teams have experienced, it’s just a matter of clicking and getting hot at the right time. This is the perfect time for Duncanville to click, as the playoffs keep moving forward.

Duncanville performed very well against a tough Harker Heights team. They scored the game’s first touchdown in the first quarter. Duncanville’s defense was very impressive allowing only one touchdown the entire game.  They kept a really good rushing team at bay the entire game, not allowing big plays against them, to keep Harker Heights from shifting the momentum to their side.

Duncanville had strong contributions from multiple offensive players. Junior quarterback, Trazon Connley is settling in quite nicely in the starting quarterback role, in place of Nelson, as he recorded 136 passing yards and two passing touchdowns. Junior running back Keilon Elder had an impressive performance as well recording 65 rushing yards and a rushing touchdown. The offense didn’t have very many chances as Harker Height’s offense attempted to milk the clock to keep the game from getting out of hand. The Duncanville offense did a very good job in handling Harker Heights stall tactics.

Hebron will be a tough challenge for Duncanville but with their defense continuing solid play and their offense continuing to find ways to score, the Panthers are a tough team to match. They have to continue to play their style of football if they want to move deeper in the playoff bracket. Right now, they look poised to keep this run going, as they continue to find ways to win football games.