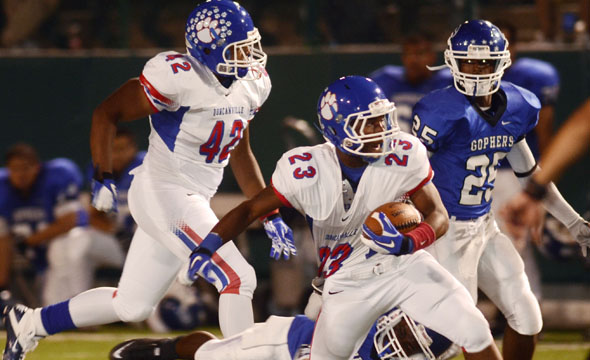 The Panthers will look to win their first home game of the season and move to 2-0 in district play Friday when they face the Midlothian Panthers. Midlothian is coming into the game after a loss to South Grand Prairie 45-24. Duncanville won their district opener against the Grand Prairie Gophers, 42-27 and come into the game with a 3-1 record.

The score between Grand Prairie and Duncaanville is a little deceiving. It wasn’t as easy as expected for the Panthers, but they dominated nonetheless. Within minutes after kickoff the Panthers were in the lead and many were expecting an early blowout. But Grand Prairie surprisingly, and quickly, responded with a touchdown of their own. The Gophers would do this again, only quicker. The Panthers then scored early in the second quarter as well.

“Our intensity and focus wasn’t at the same level as theirs was in the first half,” Coach Jeff Dicus said, “but I think that says something about our football team, that we can play sub-par football for a half and then be able to turn it around”.

The Panthers were comfortably in the lead for good in the 4th quarter, scoring two touchdowns and completely stopping the Gopher defense. The Panthers have won the last the 3 games in a row, and are 1-0 in district and 3-1 overall. While it’s still early, it is shaping up to be a good season for the team.

“Obviously we want to be district champs, that’s our main goal,” Dicus said, “but to be able to do that you have to take things one week at a time. If you don’t, there ain’t gonna be any district champ talk.”

This Friday will be another game, that on paper, looks like the Panthers should dominate. But as Dicus said, “anybody can beat anybody”, the team will go into the game with that same mentality, against Midlothian and all the other teams this season.