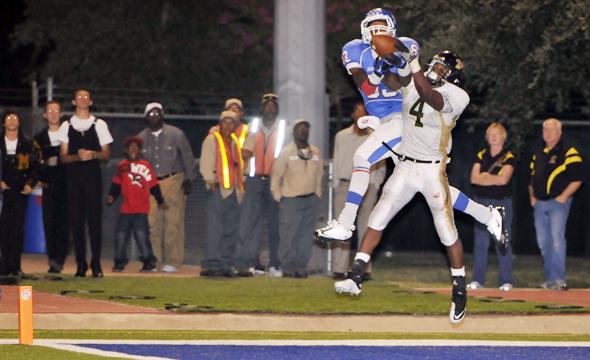 The bench emptied to the endzone when senior quarterback Divan Ealy connected with receiver Jeff Thomas on a 28 yard last second pass to give the Panthers a 41-35 win over undefeated Mansfield at Panther Stadium Friday Night.

Mansfield tied the game up with a late rally leaving the score at 35-35. After the Panthers turned the ball over it looked like Mansdield was in a position to take the lead with less than a minute left in the game. The Panthers defense however put pressure on Mansfield’s quarterback Jerod Evans who threw into a host of Panther defenders. Duncanville came away with an interception putting the game back in their hands with seconds left in the game. after a big third down conversion on third and 10 wen Ealy found receiver Jalen Parker who stretched out for a first down.

With only one shot left at the endzone Ealy again connected with Thomas giving the Panthers the win and a share of first place in District 5-5A.

Ealy completed 22 of 34 passes on the night for three touchdowns for a combined total of 346 yards on the night. The Panthers are now 4-2 overall on the season and 3-0 in District play. They will face South Grand Prairie next week in Grand Prairie.