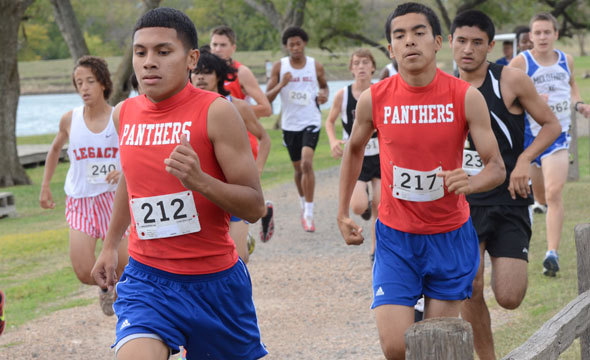 The cross country team finished their district season this week on a familiar course at Midlothian’s Camp Hoblitzelle park. The girls team finished fourth with Ana Salazar advancing to the Regional meet later this month.

“I am proud of Ana for becoming the first Duncanville cross country runner to compete at the Regional meet for four consecutive years,” coach Beale Tolbert said. “Her team also did well finishing in fourth in a tough district.”

On the boys side several of the boys finished in the top 25 but failed to make it to the top of the pack. Tolbert said most of the runners on the boys side are dual sport cross country runners that are just part time on the team.

“They give it all they have but this is very hard on them since we are in a district where the other schools have athletes that are only cross country runners and train in one sport all year long,” Tolbert said. “Although we appreciate other coaches sharing these kids with us, it is hard on them as athletes to be competitive in multiple sports.”

On the boys side Terrance Mitchell finished the course with a top time of the season.

“The boys made some improvements and we are making plans of returning them next year and getting to the Regional level with them,” Tolbert said.

Going into the meet this week the team was familiar with the course and knew what they needed to do to compete in Midlothian.

“Last time we ran here we didn’t have the best outcome, but we are looking to better this time around,” junior Guillermo Tobar said.

Last year’s district meet was also held at Camp Hoblitzelle. Neither of the teams advanced to Regionals except for senior solo runner Anna Salazar. Salazar is the top girls runner and went into the meet expecting to advance to Regionals again.

“This is my last district meet, so we have been training extra hard in order to advance all the teams to Regionals,” Salazar said.

The runners have been practicing nonstop from working on their hill work to working on getting a good start.

“One of the tough things on this course is that it does have a lot of hills and we need to be ready for that,” Tolbert said prior to the district meet.

The junior varsity girls team also finished fourth in a tough pool of runners. Tolbert said this leaves a ray of hope for the future.

“All of the runners utilized the tools they have for a course like this and they are looking to finish even stronger next year,” Tolbert said. “We will look to pick up more runners next year and be even more competitive.”

Overall Tolbert said she was proud of the runners for the effort they put in all season and at this weeks meet.

“We faced some tough obstacles in the beginning of the season with the extreme heat keeping many of our runners from practicing and that was difficult on the team,” Tolbert said. “When they only get to train basically half the season it is tough on these athletes and I think they gave me everything they had with the amount of training they were able to put in.”