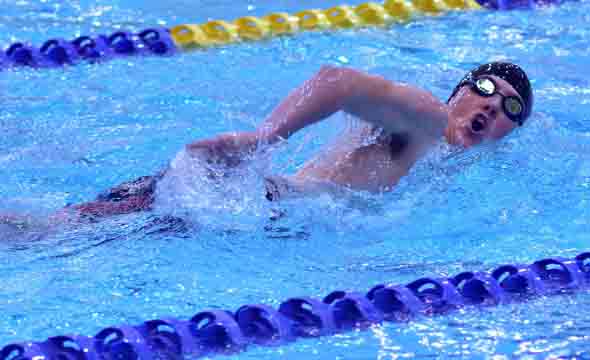 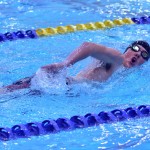 Seventeen of the 24 swimmers on the swim team will be competing at this week’s Regional meet. (Issac Bivins photo)

After a strong performance in the District Swim meet, in which 17 out of 24 swimmers qualified for Regionals, the swim team will head back to Mansfield on Feb. 10 to try and better their performances.

“I was ecstatic,” coach Theresa Chumbley said, “The kids have worked really hard and I was super proud that so many of them did so well.”

Even while being one of the top prospects, junior Catherine Bartosh still had a bit of anxiousness before the district meet.

“I was nervous at the district meet,” Bartosh said, “but I knew that I had prepared very well for the meet and so had the team so I knew we were going to come out with really good results”

The team is optimistic about performing well at Regionals and is confident and supportive about each other in their individual events.

“Most of our team is pretty good, there are some things everyone needs to work on before Regionals come,” sophomore Maddie Samples said, “but everyone has obviously made it this far because they’ve been working hard.

Two out of the four swimmers on the boys’ relay team are first year swimmers who qualified for Regionals. Junior Keenan Blair is already a student athlete, but says swimming is a different challenge.

“It’s a big transition because football comes natural to me, so when I go to swimming I have to get on my mindset that I have to work at this because it’s not what I’m accustom to,” Blair said. “It feels good because I feel I’ve accomplished things that people who have been swimming for years haven’t.”

“I used to swim in Brazil when I was a kid, when I came here I didn’t have anything to do so I got back in swimming and I’ve been working hard and it’s been a great experience,” Lima said. “The guys are really good, so working with them was good. They accepted me and were friendly with me because I took the spot of someone who had been swimming here for a couple years.

Chumbley is proud of how her kid have worked through out the season and that despite the number disadvantage they face, they are still able to keep up.

“We train really hard and do a lot of yards in our practices,” Chumbley said. “Most of the larger teams in our district have many swimmers that swim at both the high school and club team practices and we only have a handful of kids that swim at the club level so I am proud of these kids.”