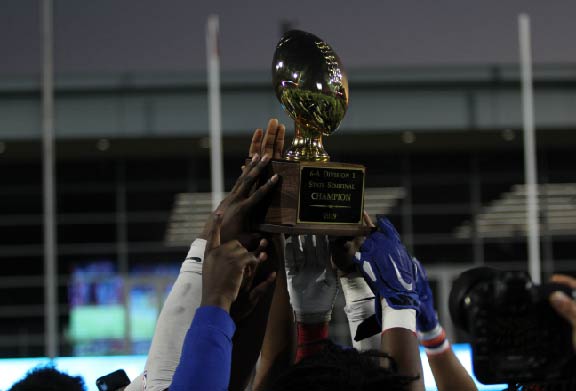 Duncanville Enter State, But at a Heavy Price

Duncanville’s mantra throughout 2019 has been “unfinished business.”

After opening a 35-0 lead in the first 17 minutes, Duncanville beat Rockwall 56-14 on Saturday in the Class 6A Division I state semifinal to earn a second consecutive state title berth.

The Panthers will face North Shore at 3 p.m. Saturday at AT&T Stadium in a rematch of one of the most iconic state championship finishes in Texas high school football history.

“Three seconds last year from [winning] state, it changed our perspective for life,” Duncanville safety Chris Thompson Jr. said. “We know that we know that in everything we do, we have to go hard.”

In response to the heartbreak, Duncanville dominated competition this season, winning 15 straight games, several against top Dallas-area and national competition.

But the atmosphere on the Panthers’ sideline for most of Saturday wasn’t so celebratory.

That’s because quarterback Ja’Quinden Jackson, a senior committed to Texas, left the game with a left knee injury late in the second quarter. Duncanville coach Reginald Samples said Jackson might have a torn left ACL, but he likely wouldn’t know for sure.

Jackson’s legs were swiped from under him on a tackle when the 6-2, 219-pound dual-threat star rushed for five yards a few minutes before halftime. He landed on his back, grimacing in pain, while trainers tended to him on the field. Teammates carried him off, and Jackson appeared able to put some weight on his leg as he moved toward the locker room.

This is it. be sure to come out and support our panthers in what is going to be finale of Duncanville’s redemption arc against North Shore.